About 5 weeks ago the wrangler wouldn’t start. It was 3 degrees outside and all it did was crank and crank. We tried a few times and decided to forget it and deal with it later. Well, as we waited the temps kept getting lower and lower. The idea of diagnosing and repairing a car in sub zero temperatures sounding like pure torture.

So I hopped on yelp and looked for the highest rated car repair shop that was close by. I found a place that I was happy with and called a tow truck company. A few hours later the Jeep was off to the doctors to get all fixed up.

A few days later I get a call to let me know the diagnosis. He said that he got it to run but repairs need to be done:

The spark plugs being used are not correct for this type of motor. This lead to it not starting in the cold. Since you tried to start the motor a few times you flooded it out. Since you flooded it out there is now gas in the oil and there is excess gas in the cylinders. Also, the wrong spark plugs damaged you coil pack and that needs to be replaced now. You total will be $1350.

So unsurprisingly this was quite a shock. How could trying to start the car a few times do this much damage? Also, What was I supposed to do? I was not about to hire a tow truck driver to go pick up the car, bring it back, and still pay hundreds in diagnostics fees to the repair shop!

So the first thing I did was ask him to itemize the costs. He told me that it broke down something like this:

Now the standout on that list is obviously the coil pack. 700 dollars for the coil pack and install? For the record all you need to do is take 4 bolts off of the pack, pull it off the plugs, and reverse that. Its arguably the easiest install of a coil pack in the world… Not to mention I feel like its odd that “incorrect” spark plugs can blow up a coil.

So I ask him about that line item. I say “that seems REALLY high for a coil pack.” He says “yea, they are expensive. I cannot source the OEM part for another few weeks but Delphi is an OEM provider and they have one for $600, the install is the rest of the cost.”

Being a person that works on cars regularly I had some healthy skepticism about that price. So I said, “if you got it to start then the coil pack must work to some degree.” He told me “yes, you could still get more life out of it but it might not last long.” So I immediately decided that as long as they get it running I can bring it home and do the coil pack myself. As for the rest of the repairs, if he’s being honest and says there is gas in the oil then I definitely will not want to drive it and the spark plugs should get replaced anyway. So I tell him to go ahead with the rest of the repairs so I can bring it home. That way the price only ends up being $650 and I can deal with the rest later. A few hours after getting off the phone I hop on the internet to shop for coil packs just taking his word that it needs to be replaced. I find the Delphi for $70. Yes, seventy US dollars brand new, shipped to my door in two days for free…. Immediately I get that sinking feeling that this guys is completely screwing me over. I understand that they mark up items for a profit but come on, really?

So they are already doing the repair, they finish and I go pick it up, and it drives great! Starts right up, idles super smooth (as smooth as those motors can get), and accelerated nice and strong…. for a few days…

Then about 4 days later it wouldn’t start again! WTF man! At this point I am pretty pissed off because the ink on my $650 check is barely dry and the Jeep is right back where it was a few days ago. After my head nearly explodes I know that I am not going to send this thing off again to spend a bunch more money. Not to mention I will not give that guy the satisfaction of knowing he was right about the coil pack.  So trudge out there in the 9 degree weather, fresh coil pack in hand, to take a look. I open the hood and immediately I see this: 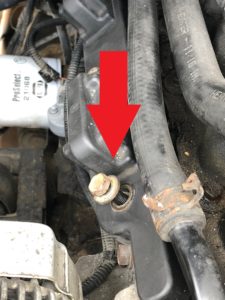 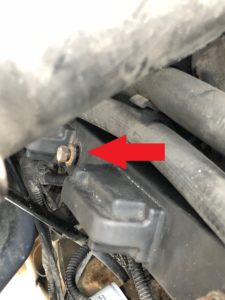 Are you kidding me!?!

They never actually secured the coil pack to the motor! It was just flopping around on the spark plugs! This is incredibly dangerous. Where do I even start? That could be the way the coil pack grounds. It could have shorted out the ignition system trying to start it, inflicting who knows how much damage to the electrical system. The car could have lost power at any time! In the winter time you lose a lot of road shoulders, the roads are already dangerous and all the sudden you can lose spark! Not to mention we take this on the freeway. Could you imagine driving down the highway at 65-70 and all the sudden your motor dies? What about the bolts? What if they shook right out of the motor? The coil would just fall to the ground while driving and rip the electrical right out with it?

So naturally I am pretty pissed off at this point. However, I had the new coil and the old one was already uninstalled for me so the new one went on in about 6 minutes. Unsurprisingly, the Jeep drove great and has been fine ever since.

I actually decided while writing this to send an email back to the repair shop to see what they had to say for themselves. I would share the email but is basically this blog post in the form of an email.

I am writing all this not to shame the repair shop (didn’t even use their name) or to scare you off of using these places. I am writing this because I want you to be vigilant, when someone gives you a repair quote, research it and ask questions don’t just instinctively say yes. Also, when the work is done do your best to check it. Had I simply just opened the hood of the Jeep in the parking lot of the repair shop I would have seen that the job was not done.

If you bring your car into the shop for something like an alternator, power steering pump, brakes, etc. its easy to take a quick glance and at least see if the part looks new and is securely fastened to the motor. I think when people send something to “professionals” we assume that it will be completed flawlessly. As the above post explains, that’s obviously not the case.

Keep your eyes open, protect you money and your assets to feel good about the decisions you make.